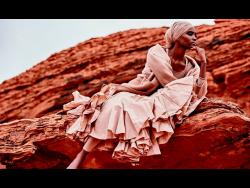 Pulse supermodel Francine James has an important date coming up with Ralph Lauren. The iconic American fashion conglomerate is looking for a new star for their advertising campaign and has made a request to meet with the James. Good news for a star who has managed to keep working even during a pandemic.

The girl who captured the imagination of Vogue as a teenager at high school, James is no stranger to working with the best in fashion. She counts multiple editions of the famed Vogue publication, covers for L’Officiel and British retailers, John Lewis, as well as beauty duties for make-up mavericks Bobbi Brown and Nars Cosmetics. Adding Ralph Lauren to her roster would be another feather in the hat of James’ repertoire of already excellent work.

The Pulse cover girl is the epitome of beauty in the multitude of editorials in which she has appeared. Italian, Spanish and German Vogue sang her praises in editorials, and so have Elle, Glamour, Cosmopolitan and L’Officiel magazines. In Modern Luxury, James’ beauty shone brightly in her 10-page story, set amid the backdrop of the desert in Nevada. The editorial highlighted her stunning complexion and brilliant features. Her camera intelligence also came into sharp focus as the model was able to produce stunning imagery in every photo frame.

These sought-after model qualities have held the attention of clients not only in New York but in London and Paris. James has enjoyed the pleasure of doing assignments that have taken her to several countries in Europe, Africa and Asia. She has done shoots in exotic locations in Germany, Sweden, Denmark, Kenya, South Africa and Hong Kong.

The shy teenager was discovered by Pulse Chairman Kingsley Cooper during one of the company’s Schools Model Searches at Camperdown High. James is among an outstanding set of winners of Pulse’s seminal competition, the Caribbean Model Search, and her selection for Ralph Lauren would continue a rich tradition of excellence begun by Pulse star Oraine Barrett and later Alicia Burke, as front man and woman for the fashion powerhouse.