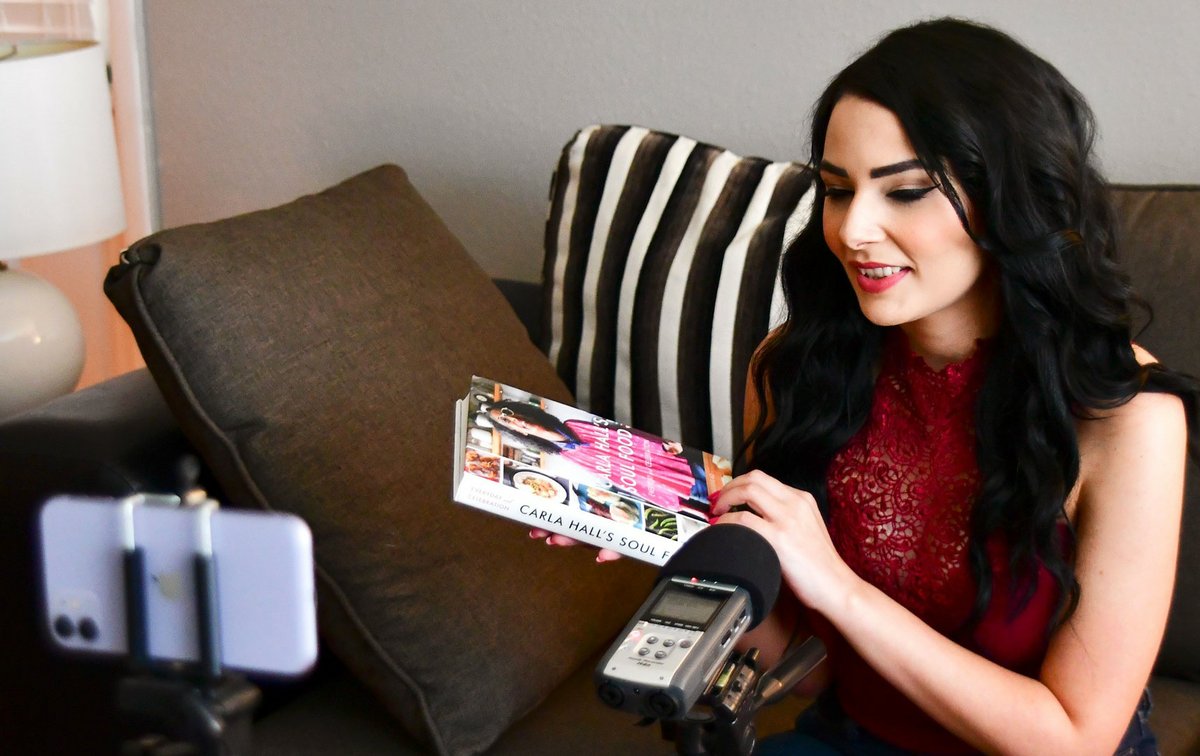 But that’s exactly how a 26-year-old Hoover woman is making her living.

Amal Dabit has become a popular contributor on YouTube in a genre called ASMR, which stands for Autonomous Sensory Meridian Response.

Essentially, ASMR is a comforting or soothing sensation that people feel in response to certain types of voices, sounds and behaviors. People have different triggers, but the sensation frequently comes in response to someone else using a gentle and soft voice, creating low-volume sounds (finger tapping, scratching, crinkling or brushing something), touching another person lightly or moving their hands in a smooth, slow and predictable fashion.

For some people, but not all, it creates a light and pleasurable tingle and a wave of relaxation in their head, neck, spine and rest of their body. It can produce a sense of calm and peace and even helps people get to sleep.

People can experience ASMR in person, but realization of the sensation led to the creation of ASMR videos that are now one of the most popular genres on YouTube.

There are now an estimated 1.5 million ASMR channels and 60 million ASMR videos on YouTube, according to Craig Richard, a biomedical science professor at Shenandoah University in Virginia who has studied the phenomenon, written a book about it and created a website called asmruniversity.com.

The most popular YouTube ASMR artist is terms of subscribers is Zach Choi, a 33-year-old Los Angeles man who specializes in chewing and eating videos, according to equipmentnerd.com. As of July 23, Choi had 9.22 million subscribers and 1.5 billion views of his YouTube videos since he uploaded his first video of eating french fries in 2018.

Dabit, who grew up in Selma and moved to Hoover about two years ago, also is considered a top ASMR artist, ranking 157th in the world with 200,000 subscribers and nearly 57 million views of her 200 or so videos, according to equipmentnerd.com.

She has been making ASMR videos about 10 years. She made her first one when she was 15 but really started getting into it at age 16 after she discovered it was “a thing” when searching for guided meditation videos and makeup tutorials.

“I was very intrigued,” she said. “That’s all it took. … For me personally, I like soft voices or someone that’s soothing in their personal manner. It’s just very relaxing.”

Dabit’s most popular video is one she made five years ago in which she pretends to be a receptionist and hair stylist at a “serenity spa” and acts out giving a customer a haircut, coloring and shampoo. She treats the camera (the viewer) as the customer. The video, which lasts 31 minutes, has more than 4 million views.

Role playing is one of the more popular forms of ASMR videos, Richard said. Dabit has other videos in which she pretends to sell health insurance, helps someone fill out a credit card application, applies makeup, registers someone for college, helps someone get ready for a date, gives someone a scalp massage and cares for friends who are sick or upset.

People are most likely to experience ASMR sensations when a kind person is giving them calm, focused attention or some type of personal grooming or care, according to Richard. This might be a teacher, hairdresser, healthcare professional, parent, best friend or partner, he said. This is why there are so many role-playing videos that simulate real-life interactions.

Some of Dabit’s more popular role-play videos are when she pretends to be what she calls an abrasive saleswoman with an Arabic accent. “People actually are really receptive to that,” said Dabit, who is of Palestinian heritage. “People love accents.”

She also does tutorials and videos demonstrating things like crafts and applying makeup and lotion. There are a lot of reviews of various products, from trying on clothing and jewelry to opening subscription gift boxes and boxes of snacks from around the world. She also does a video where she does a taste test of Cajun hot sauces.

Dabit does movie reviews, a Christmas ornament show and tell, a “Halloween sound assortment,” “what’s in my purse,” chit chat over breakfast, liquid lipstick sounds and swatches, and “answering questions no one asked” while chewing gum.

“Whatever my mood is — if an idea strikes me, I will do it,” she said.

She also takes requests. One of the more unusual requests was for her to pretend to be a giant woman, wear high heel boots and crunch something under her boots. She doesn’t fulfill every request though (some are more than PG-rated).

Most of the top 10 ASMR artists in terms of the number of subscribers deal with eating or cooking, according to equipmentnerd.com.

Many of Dabit’s videos are very soft-spoken, almost whispering, and require the viewer to turn up the volume. And her ASMR voice is not exactly her normal voice.

“I definitely put on a little bit of a voice when I record my videos,” she said. “It’s more soft, maybe a little more high-pitched — soft, tender, sweet.”

Richard said there have been more than 12 peer-reviewed research studies about the relaxing effects of ASMR, and they show that ASMR activates specific areas of the brain and helps people to decrease their stress, decrease their heart rate and fall asleep more easily.

Dabit, who described herself as “nerdy” growing up, said that when she began doing videos, she never anticipated she would one day have 200,000 subscribers.

“I never thought anybody would want to watch me,” she said. “I’ve never been one to want a lot of attention on me or to be the center of attention.”

She’s not sure what has made her video channel successful. “I like to think that I have a good personality,” she said.

Shay Dahl, a San Francisco woman who has been watching Dabit’s videos for about six years, said she stumbled upon one of Dabit’s videos and started watching her because she is a beautiful woman and she liked her style and fashion sense. She then saw that Dabit was down-to-earth, funny, creative and intelligent, too, and had a lot of good information to share. “That just kind of kept me watching her,” she said.

“She seems very open to people, about interacting with her fans,” Dahl said. “She’s just incredibly sweet. … I would love to meet her someday.”

Dahl said ASMR videos are relaxing and help her destress. “It’s a sense of escapism,” she said. “Everything in the ASMR world is pleasant and nice. You can just kind of escape in that world listening to someone speak in very pleasant voices.”

MORE THAN A HOBBY

For Dabit, it’s much more than a hobby. She makes some money from working with her family’s On Time Fashions men’s clothing stores and helping out with the apartment complexes and rental houses her father owns, but the ASMR videos are her primary source of income, she said.

Many companies simply send her products for free, hoping she will include them in a video. Frequent gifts include clothing and beauty products. She recently received a free bouquet of 36 black roses from Rose Forever in New York, which she liked.

Her videos are completely free to watch, but some of her subscribers become patrons and send her donations or gifts, she said. “I have really great subscribers.”

She also does ASMR Skype sessions for individuals for a fee.

Dabit said her parents think what she does is cool. “My parents have never been anything but supportive,” she said. “All my family is aware of everything. I’m an open book, and they all support me.”

Some ASMR video artists upload videos every day, but Dabit said lately she is trying to aim for about once a week. “My biggest fear — I just don’t want overexposure,” she said. “You don’t want to be in someone’s face every day.”

And Dabit said she’ll keep doing videos as long as her viewers allow her to do it. “I love it,” she said. “To me, this is just hilarious.”